Belgium label A New Wave of Jazz has released a steady discography of albums, all sharing an in-house visual design that favors minimal aesthetics. This visual identity, incidentally, is the work of Rutger Zuydervelt, the experimental sound artist who records as Machinefabriek. This dedication to minimalism extends to the sounds on these releases, each exploring a less is more approach to improvised jazz.

Label director Dirk Serries is present on all recordings, and this month sees the release of a trio of Tonus albums. Tonus is described as “the next chapter in his ongoing investigation into the relation between sound and time”, which is certainly evident on these three new works. Space, slowness and an exercise in restraint are common threads in each. Tonus is a collaborative project which involves Serries, his wife Martina Verhoeven and a revolving cast of musicians, and this set of albums documents both live and studio settings.

Intermediate Obscurities I + IV contains the largest group of artists with Serries, and also the most material, clocking in with two long-form pieces just shy of an hour each. “I” sees a total of six members utilizing a range of instruments, but never feels crowded. A single piano key or hit of a drum will dot the piece as will a strum of guitar, but these are connected by longer drones and flutes. This piece was constructed as part of a residency in Belgium and has a “live in the studio” feel. “IV” on the other hand is an actual live recording from a performance in London which is looser and a little more jagged, adding tension and unpredictability. Improvisation is often referred to as a language, where the members are forming a narrative in the moment, and this first statement in the Tonus series is doing just that. Group communion, group communication.

With Texture Point, the group is reduced to three, and the reduction of sounds is taken even further. Serries is joined by Benedict Taylor on viola and again Martina Verhoeven on piano. Verhoeven’s piano notes on this recording are much darker and lower than “I + IV”. The spaces between all points on this studio recording become longer and longer, the reductionist aesthetic more pronounced. At times the viola is scraped into alien textures that add dissonance to otherwise clean guitar plucks and keys. Toward the second half of the third track, “Point A”, the sounds forge together and rise up to form a rare moment of denseness, before retreating into even lengthier shadows of silence. The last five minutes of the final track, “Texture III”, are filled with room tones and almost-silence that serve as the perfect way to end this CD. 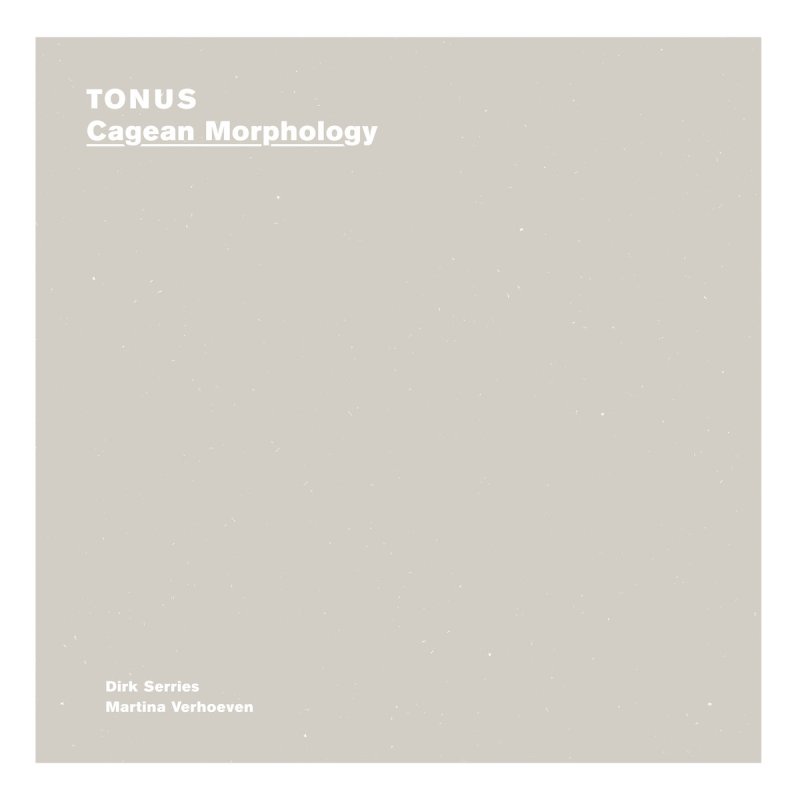 The final installment is a single 34 minute piece spread across the disc entitled Cagean Morphology. Clearly named after John Cage, this piece sees only Verhoeven as Serries’ collaborator, again on piano, him on acoustic guitar. Of the three albums, this takes the philosophy of minimalism to its most extreme. No doubt informed by Cage’s maxims on the notion of silence, prolonged stretches of nothingness rest between single notes, creating a deep, quiet music that requires active listening. Listening to this, I’m reminded of Taku Sugimoto, whose ultra-minimal guitar playing could often test the patience of his audience. His work in Tokyo’s experimental “onkyo” scene has a rival in this new Belgian strategy. Dirk Serries and his Tonus collective appear to be seeking out new scenarios of improvisation based on silence, minimalism and collaboration that signals an exciting future in this area.

Tonus as an ensemble grew out of my jazzcase residency in 2017 for which I brought together a sextet to work around a slow piano motif by Martina Verhoeven. The literal translation of Tonus is muscle strength, but in this context defines a musical system that places equal importance on the space between notes. Both definitions apply here as the music is an exercise in discipline and anticipation while controlling the clarity, sustain and effect of each single note played. The birth of the Tonus Ensemble happened when I realised that I needed a vehicle to explore and perform these exercises, as well as a general classification for his ongoing study in minimalism and free improvisation. – Dirk Serries

CENTS/SENSES: Did you enjoy this review? Do you like how Toneshift.net rings in your ears? October is your annual chance to directly support our commercial-free review format. All those who contribute and make a donation will be celebrated here: toneshift.net/donate