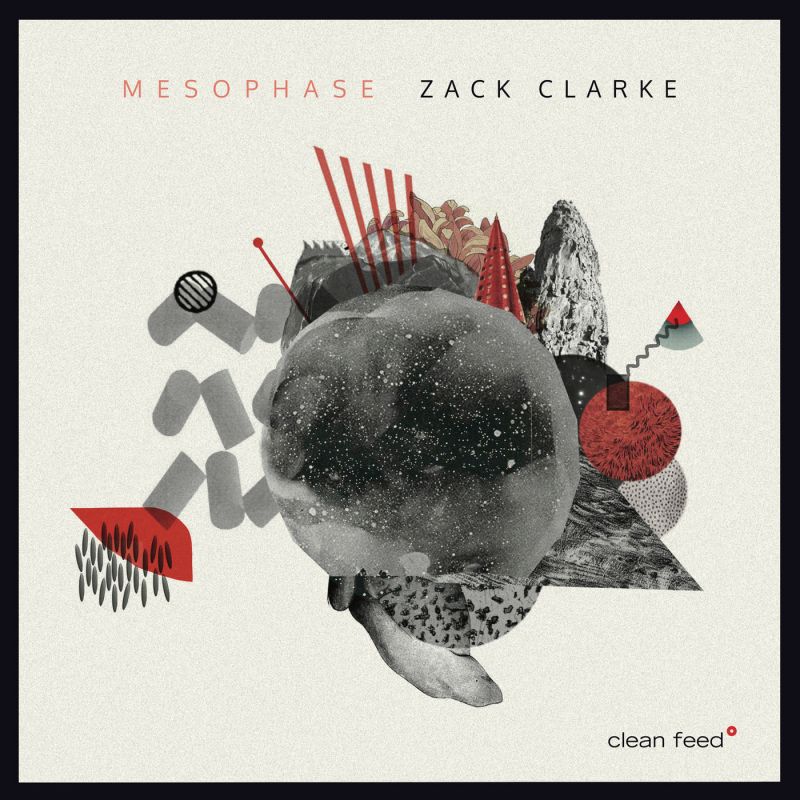 The follow-up to his Random Acts of Order (also on Portugal imprint Clean Feed) is the brand-new effort, Mesophase, from NYC pianist/composer Zack Clarke. The lineup is as follows:

OK, so, from the start, the physics-based title comes from matter which is neither liquid nor solid…posing the ultimate question: what is it?  Well, it’s aptly between worlds, jazz, electronics, classical, tropical sound effects and more – just for starters. These inflections are referenced in the very opening minute of Curtain. The atmosphere wreaks of lush drama, of being encompassed by the dance of birds, as the near big band era style piano flexes around some lovely wind instruments and murky bass. It all flutters until it tumbles into a fusion of improvised delights. Over all this comes off like a jazz record in the scope of Ornette Coleman or Henry Threadgill – but its pauses tweety-ness and zooms harken to Sun Ra’s Arkestra. Mind you, those legendary hard-hitters started crafting their epic evolution long before Clarke was born into this tech-heavy virtual/social media generation — though overall his signatures remain his own, and only channel some of these important references — and he does so with sensitivity and skill.

The quintet plays with big ears as a whole rather than jamming into typical blazing solos. The pitch glides and hides with watery and squealing abstraction (Generative, Infiltration), keeping to a fairly minimal and concentrated performance. On Beggar, however, an emotional chord breaks free, partly due to the sensuous cello courtesy of Chris Irvine, and though the starts off in a field of pastel colors the pace slows greatly towards the midpoint, becoming darker and quite forlorn, almost melancholic. The change in timbre and mood is deep, but incoming a chordal sign of hope rises.

Elsewhere this recording seems more experimental with the crossed lines of Tilted which is as mesmerizing as it is dizzying, like catching a glimpse of an incredible view and then tumbling down from a strange elevation. It may be the most effective piece here, from the perspective of seeing what you hear. Suddenly I am transported to a jazz lounge listening to what I think is a trio of percussion, piano and bass on Reticence, but nothing is as it seems. Something is just off, maladjusted. If you listen closely it is as though there are two tracks playing at the same time, one live, one pre-recorded, or somewhere in the near distance. Weirdly the sensation is embracing and active. It’s also slightly disconcerting and awkward, making you squint your ears to try and multi-task (decipher) the aural mirage. If you have ever been to the cinema to see a typical drama and in the larger theater next door they are playing some extreme action blockbuster and the sound spilleth over….You know what I mean.

Assimilate has some of the same effect as the previous track, but is much more abstract, with tiny electronic emissions embedded in the piece, like frozen static tempering. Charlotte Greve’s flute here is stunning here, I’m drawn and slave to its rhythm. All the accompanying players offer support to this strange acoustic occurrence, wo/man and machine tip-toeing around each other, yet in a flow of language that is ultimately a gratifying listen. The stops, starts, the open spaces in the midground, the tiny squeaks, all are circumferential and stylish. The more sparse side bleeds easily into the discordance of Bridge which offers a soundtrack to a lost underground journey. With its slightly eerie chords and Leonid Galaganov’s subtly dramatic percussion we go into a deep cavern with the occasional bright spot.

Clarke definitely takes this out with a bang amid the noisy separation and grind of Bravery. After an extended, winding passageway of broken expectations (in the best way) that grew over the previous nine tracks, we are left in a remote space, boundless amidst peril in thin air. The bird calls return for the first time since the opener and the varying cadence of frequencies is heartily toyed with. Here, in his raw conclusion Clarke gives us a heaping dose of playful detritus that defies any previously hinted-at conventions. It simply sends chills.